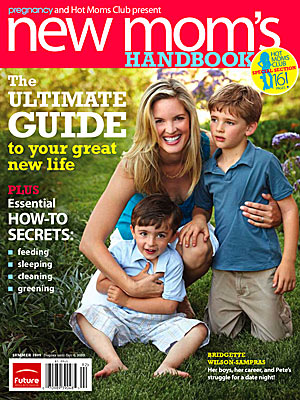 “The first time around as a mom, I held on really tight and I was so stressed,” she reveals in the Hot Moms Club summer issue. “Pete was a little freaked out so he wasn’t doing anything. And we were like, ‘What’s happening here?’”

With the arrival of their second son Ryan Nikolaos, the couple — albeit “more confident,” having established a “rhythm” – quickly realized that they were in desperate need of a vacation, if only for the sake of their relationship.

After struggling through “some nightmare experiences with babysitters,” Bridgette was understandably wary of leaving her baby boys, but a determined Pete was unwilling to give in so easily! “I was like, ‘I love you and all, honey, but I’m busy,’” she recalls.

“Pete was like, ‘Oh my God, I’ll fly your mom down! Can we just spend the night, one night somewhere?’ I said, ‘Okay, sure.’ You have to stay connected to each other. I know my husband felt not so much a part of it and [when he felt] not a part of me, it made everything so much harder. That was a lesson that took me a while to learn.”

Urging new mamas to accept that “you know more than you think you do” and “to do what’s right for you,” Bridgette shares that she too had to rely on her instinct when it came to her role as the household disciplinarian. “Pete laughs at me because if they are doing something, I say, ‘Let me explain that’ and ‘Let me remind you, this is how we need to do that, so let’s not do it that way again,” she muses.

As the 35-year-old mama has been forced to encourage her boys’ independence, in the same breath, Pete has equally learned to let his wife “talk things through.” That, says Bridgette, is the beauty of co-parenting!

“We had to give each other permission to be different as parents. That’s why there’s a mom and a dad with two different approaches, because you do need both.”

A 15-year career filled with Grand Slam titles and countless championships has Pete branded as one of the greatest tennis players to date, however, despite his love for the game, the proud papa is allowing his sons to choose their own paths in life. “He is not one to push; he’s not pushing tennis, they don’t even play tennis,” Bridgette notes. In fact, she admits, the boys are completely oblivious when it comes to their father’s history!

“[When strangers introduce themselves, Christian will ask], ‘How does he know you, Daddy?’ ‘Well, he saw me play tennis.’ And he will be like, ‘Oh. Where?’”

As for Bridgette, her hiatus from the big screen since starting her family is a decision she never regrets. “For now, I want to be there when [the boys] wake up and I want to be there to put them in bed,” she says, adding that her return to acting is simply “a matter of when.”