SAN JOSE — It had more of a Harlem Globetrotters feel than a high-level match, but the crowd at HP Pavilion on Monday night didn't seem all that disappointed.

Pete Sampras gave them more than an hour of entertainment on Day 1 of the SAP Open, and that's all that mattered.

Not even news that James Blake, Sampras' scheduled opponent, couldn't play because of a bad back dampened the spirit. For the second year in a row, Tommy Haas pinch-hit for an injured player (Marat Safin withdrew last year) and this time got the better of the tennis legend.

In an exhibition that included a lot of laughs, high-fives with fans and some electrifying winners, Haas and the 14-time Grand Slam champion split two sets, with Haas winning the first 7-6 (7-4) and Sampras taking the second 6-4.

Then in a tiebreaker to decide the match, Haas won 12-10.

"A lot of people came to see Pete tonight, so I don't think it was really about who he was going to play," Haas said. "I played him here last year, so I thought maybe I could give him a better show, a better match this time." Blake, who suffered back spasms during a doubles match Monday, hasn't ruled out being ready for his first-round singles match Wednesday night against Vince Spadea. Shortly before Monday's exhibition, Blake walked onto the court with tournament director Bill Rapp and broke the news to the crowd.

"I'm sorry," Blake said. "I just can't go out there and give it my best. I'm going to go back and visit the trainer. I hope to be out there Wednesday."

One of the more memorable moments of the exhibition came near the end. With Sampras leading 10-9 in the tiebreaker, he literally ran out of his shoe chasing down a point.

Sampras ended up on his back, the point was replayed and Haas ended up winning that point and the next two to close out the match.

"It was odd — unfortunate," Sampras said, "because I kind of had control of the point." When it ended, Sampras was asked if he would consider coming out of retirement. Like last year, the crowd roared at the thought but Sampras said, "No chance." "The way I was breathing, I was huffing and puffing like an old man," Sampras said. "It's a lot of work being No. 1 at 25 let alone trying to do it at 37."

Asked what he likes about exhibitions, Sampras said, "It's a challenge for me to keep up with these guys; they do it every day. I do it once a month. It's tougher for me to move around and recover from some of these points. (But) it keeps me in shape. It's good for me. I'm not looking for anything more than just going out and having some fun and playing well."

As for his thoughts on Roger Federer's recent loss to Rafael Nadal in the Australian Open final — an outcome that prevented Federer from matching Sampras' Grand Slam titles record — Sampras said, "If I were Roger, I would try to come in a little bit more, especially on my serve. I'm sure he's frustrated. He's playing fine. Rafa's just an animal. The guy can play all day, play at a high level for hours.

"I felt for (Roger). He's frustrated, and he wants it so bad. To be at that breaking point, it's affecting him a lot more than I thought." 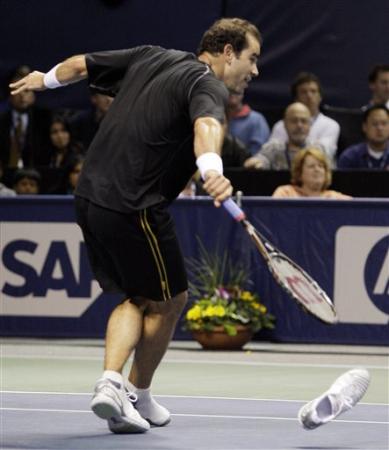